Homer Curtiss provides a sketch and description of his camp in Alexandria.

The 1st srgts have “A” tents which
are at the head of the struts
in line with the Sibleys and
of course out of sight.
“That hutty looking concern is
the srgt maj’s tent, looks bad
enough at least, but not so bad
as the sketch would have it.

Well here we are, at home. I do not need any picture of your home
to see it perfectly, but as you never have seen our camp, probably your idea is rather vague.
The picture is quite correct so far as concerns the general appearance, but you can hardly
see us as we are, with this. The entire lack of life, spoils the whole effect, as life is
the charm of camp. The picture was got up only two weeks since but there have
been some changes that are considerable to us, but would make no great show on paper,
as for instance there are some 3 or 4 cords, instead of sticks of wood to each cook tent
and we have a good frame guard house in place of the old Sibley and wall tents.
You will remark the close proximity of the guard tents to the cookeries. It is really
some 20 rods between them, but the sketch was taken from a knoll just outside
that overlooked the guard house, and looked into the streets which descend all
the way and are some 10 feet above the guards. The men also are too large for
the tents but that is a natural enough idiosyncracy (how do you spell it)
I dont recognize anybody in the streets or on guard, so I guess I am in my tent writing

[page 2]
Sunday p.m. Dec 28th 1862
I have been very busy and am again behind in my writing. arcoorse
I have heard from Warren but once since Frank left, that was through Alice.
Why dont you write occasionally. I know you wrote last, but dear me do write again.
I’ve found a man in Co. C. whose name for nick was “Pip” before he left home.
He is a little funny pleasant man 80 years old with a very hirsute face.
I made his acquaintance as soon as I found him out and now he and I
greet each other as “Pip”! daily. Saturday eve Jan 3d 1863
Aix crum a saur kraut
Why bless you. I could not write when
Frank was here. I could not think of anything to say on paper, when I could
pour it right off my tongue without much thought. Could I? Could you?
I had forgotten all about the album till you spoke of it, so it was satisfactory?
I put in the photo of Little Mac, because it looked so exactly as he did the day
I saw him and because I think him the finest looking man I ever saw.
You need not have it in the album unless you like. I send Austin’s
carte as requested. I would get one of Homer’s if I dared to ask him for one
but I don’t and never shall, so you will have to go without or ask for it yrsf.
Why didn’t you like my fat picture I did later. I sent the trim of it and
one in full working dress with rife and belts, to Ellen last week.
Austin never got as good a picture as he is fellow, but the one he sent up is as good
as he can get down here. This photograph is very good but is a lower production.
I guess Austin sometimes thinks he has no home or any one to care for him much
but it does not worry him badly, he is always lively when well and we all like
him lots. His voice has returned and he’s more lively than when Frank was here.

[page 3]
I’m glad Mr. Gleason is such a trump. He must be quite an acquisition in these
troublous times when change and gents are so very scarce in the rural districts.
Give Jubal my best ‘spects and say I do like for to see him face to face.
Who monopolizes him? Elaney, Lilia, Laura, or you gals? For of course some
one of you claims him, perhaps all. I’m sure I dont know.
Geo. A. has reached the acme of his ambition if he has started a lyceum. How
does he bear his great joy? Charlie is the same dog on the old button.
I dont often think of the boys up home but this reminds me of them.
Do they look and act just as they used to when we were all up there together,
5th Jan. Johns box came to day safely through somewhat the worse for wear
We are going but not gone yet. We are in Gen R.C. Tyler’s brigade and
it is reported he is ordered to front, so we may go to Falmouth after all.
We have been going to Ft. Richardson for a week, but we are still here.
The 26th Mich. Vols has relieved us of all our provost duty so we are resting
now and Col. J is giving no rats in the drill. I like it now.
Lucian is very sick and I fear will not recover, but our boys are all better.
21 have died and more that number have been discharged and deserted.
We rally quite a battalion now, for drill and dress parade. Over 400 men.
I know by sight nearly every man connected with the 19th and have some
new acquaintances, and one or two new friends. There is little Johnny
Blakeslee, not Pip, who I think ever so much if and you would if you
knew him. I have his picture and perhaps will send it to you some day.
He is one of Ed Sackett’s old scholars and he is as slick as a mole, funny looking.
I will leave you to guess how he looks for a few days. I like him lots

[page 4]
If you read the “Enquirer” closely, perhaps you noticed a little half square
paragraph relative to a cavalry raid on Dumfries. It wasn’t much, nothing
to you, but it caused quite a commotion with us. It was reported
that Stuarts cavalry supported by a battery of 6 guns and 3.000 infantry
was going to give us a pull after the Dumfries affair, so we were kept
on the qui vive (is that according to Farquelle? I guess it is Hardee)
We lay on our arms 3 or 4 nights and were out in line all of one night.
It was nothing but a little preparation lesson to us, but we shall not
forget it till something bigger turns up. It is called “Our First big foot
in Front” throughout the camp.
Tis after 12 o’c and I am sleepy. I shall not fill
the page. Good night
From yr brother Homer 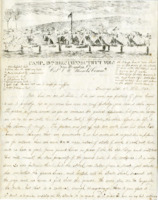