Cornelius Gold writes to his mother about life on board ship, infrequent mail delivery, his colleagues, and an expedition into Mobile Bay.

USS “Stockdale”
Mobile Bay Feb. 4 1865
My dear Mother
I lost the last mail. No amount
of industry could have avoided it. I was kiting about the
Bay those days looking after the welfare of any steam
babies, and you know one’s children must be the first care
always. I learned that lesson from a certain good mother
of mine who I dare say came down from the Puritans and
knows what is right better than I do. Of course she will be the
last to upbraid me for following her worthy example.
She knows that next to the children I put the parent, and in
this case event first, because my babes are not event brutes,
while the mother is human and woman, My boats are my
babes, and they wear out more pants in a week than I have
done since my birth so fancy the patching and darning
that has to be done before midnight each Saturday.
There’s a great pile of clothes still ahead of me, but I gain
on them now, and by the end of this month hope to be square
up with the heap. Then, if I do not write much at once,
I will try to be regular, and frequent as may be perhaps
every week or two weeks at the longest. Our mail
boat goes to New Orleans each week, and transports
sometimes between. The mail leaves New York every Saturday

[Page 2]
and I think Wednesday also. I hear nothing yet since
I came here, from you. Quite likely the “cowslip” has
a letter or two from Connecticut. We look for her in from
New Orleans hourly, she is overdue now. Capt. Bacon said he
would get from the “Vincennes” any letters waylaid there for
me, and bring them along. It is time that he did so. Last
week he forgot it. The “Fort Morgan” is expected here today on
her way back to New York, and Paymaster Sherwood, who stands
clear of encumbrances now, goes home in her. He has transferred
his account to me, and resigned his appointment. A young
wige is the cause, who said when she married him, ‘You
must give up me, or the Navy’ – so he gave up the Navy.
That is all very well since the “sine qua non” was backed
up by her father, and “Dad butters the bread. I quite
like Mr. Sherwood. He has been of great service in
breaking me into the traces, and made much smooth
that would have been crooked and rough without his
assistance. I am pretty well launched into the deep now,
and anticipate no trouble. Mr. Farrington, who came
on as my steward, I transform into a clerk, and find him
the man for the place, quick, intelligent, clever, and quite
a handsome writer – should hardly know what to do without
him. The best of it is – his good bringing up and entire
trustworthiness, though I put no money into his keeping,
indeed have little to care for myself just at present.
Hope to go to New Orleans and “buy some” this month.

[Page 3]
The supply stmr Circassian “Bermuda” arrived from Philadelphia
a week ago with fresh provisions for the fleet. I was ordered
by the Fleet Captain to take supplied from her to the vessels up
the Bay, so had an opportunity to see how the land lies about
Mobile. I suppose we steamed within five miles of the city, at
any rate, near enough to see it quite distinctly with a glass.
The rebel ram “Nashville” lay between us and the landing, with
steam up, and great volumes of smoke rolling out of her
tall stack, + guns stood ready to salute us from her deck on
our approach, but as out mission was merely to give food to
the hungry, we were willing this time to forgo the usual
honors of war. We kept away from that ugly looking
“Nashville!” But there is talk of her early transfer to the
Union Fleet, that is, the city of Mobile and all its appurtenances,
is bargained for, and by the army, if not the navy, we mean
to gain it. You see I can say “we” in speaking of the
army. I intend to hold fast my citizenship in its ranks,
despite the service of my later adoption. I gloried
in that, am contained in this. The musket, if heavy, was
balanced by love of the cross borne for love of the Land.
We came down the Bay the same evening & anchored at
Grant’s Pass to watch for Blockade runners until morning.
Then Capt. Godfrey came to the cove, and returned me on
board the Stockdale. We hastened to leave Mobile before
dark to get out of the way of torpedoes that are sometimes
sent floating down in missions of mercy to blow up the Yankees

[Page 4]
Down here, we are quite out of harms way, in a haven as
safe as New York Bay – and are harmless ourselves.
The weather has been fine for a week or ten days, but
to day first came a fog and then down poured the
rain. The deluge is under and over us. No lack of fresh
water for washing and that’s a comfort. We were reduced to
salt water for a little time past, and one eyes get
crusted with salt in due time with such treatment.
One luxury we enjoy, I did not anticipate – viz. ice.
The supply vessels bring it as preserve for the meat
and give these large cakes with each quarter of beef.
We dined on roast turkey today – one of three contraband
gobblers who have lorded it lately over a coop of reb
chickens that live on the hurricane deck. All will
get their deserts, and be eaten in course of the winter
and spring. One poor man of the crew will get no poultry
at his dinner soon. He was tried by Court Martial
yesterday + sentenced to 15 days double irons (hands + feet)
on bread + water + loss of wages for one month.
crim. fighting. His sentence was read today to him
by the captain in presence of crew + officers, + instantly
carried into effect. A warning to us all to beware
of squabbling. I shall set about paring my nails
at once, and muffling my fists, and putting pillows
over the toes of my boots, for one is terribly tempted to get
mad + break things sometimes. If you will excuse me, we
prepare for action at once. Your aff. Cornelius 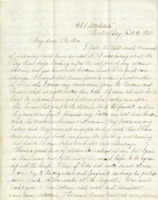