Cornelius Gold writes to his mother of moving his office on shore, finding a place to live and work, and life in Mobile following the war.

Mobile Ala. April 30 1865
My dear Mother
I propose a Sunday nap to my
self presently, but before taking it will dispatch a note to you.
It is not my usual custon to sleep by day, fortunate for me
is it, if I secure a reasonable share of sleep by night. The
mid-night oil of Saturday is my excuse for sloth to day.
I have told you of my last change, but not exactly the manner
of it. It was this way. The Anderson on which I was stationed
drew too much water to get over the bar, and could only
approach within ten miles of the city. When the fleet came
up, I was consequently isolated form the boats whose accounts
are in my charge, to my great inconvenience + to theirs.
One day the doctor (Drummond) of the "Anderson" and I
jumped on a little tug in a fit of desperation, and made for
Mobile as fast as the young steamboat could carry us. We had
a jolly ride of it, and spent the night at the "Battle House" after
seeing the city by gas-light. We reached it in time for a stroll
in Government Street before dark, the avenue of the place, lined
with pleasant houses + fragrant with green trees, roses +honeysuckles.
We fairly wallowed in delight that evening, + went wild over
the pretty women, real-live beauties that we met in our ramble.
Indeed, mother, I do believe in the female persuasion in general,
as very necessary desirable half of creation. We men are never

[page 2]
so conscious of this fact as when brought in sudden contact
with the air the gentle creatures breathe, after months of confinement
in our wooden cages. I at once became decidedly of opinion
that my proper station for the present was in Mobile. Next morning
I reported on board the flag-ship, + ref stated my business necessity
so forcibly, that Capt. Simpson directed me at once to make such
arrangements as I could "for the benefit of the service." Within twenty
four hours thereafter, I had selected an office, secured it from
the Provost Marshall for my use, and reported all my goods
+ chattels at the door, the fleet captain allowing me the use of a tug-boat
to bring my things from the Anderson. It took five men one day
to remove the rubbish + scrub the rooms into decency, but at last
I was comfortably settled. So I thought, but woe is me! I had
fallen a helpless victim to mosquitos + fleas. The latter are
my greatest torment, + indeed are the help worth mentioning, for
their industry is marvelous. They hop + bite from one end of me
to the other + from sun-rise to sun-rise ahain. I am informed that
the "China Leaf" which grows plentifully hereabout is a sure
exterminator of fleas, or at any rate will drive them all away.
It becomes me to try this remedy I think. As yet I have
secured no boarding places, + until I get leisure to look around
shall contrive to have my meals cooked + sent to me here.
Batchelors Hall in reality, is this + not bad to take after being
cramped up in a small state room. I have too fine rooms for
office + for sleeping + obliging neighbors have "set me up" in
housekeeping by the loan of a desk ward-robe, office chairs bed-stead

[page 3]
+ so on, down to crockery and candle-sticks. I have two good
honest well behaved sailors with me to do the manual labor part,
and a handsome check clerk to do the "respectable" for me. Altogether
you might be gratified at at a peep through the window, just to
see how very comfortable I am. That my work is constant, so that
as yet I can call neither morning nor evening my own, is perhaps
not a matter for regret. It doubtless keeps me out of much mischief,
as I am rather viciously inclined. In any event my mind is so
occupied that homesickness or mental sickness is out of the
question. I believe in work as the best cure for ever ill. It is
the Bible principle of "overcoming evil with good".
One windfall I have not mentioned. Before leaving the "Anderson" to
come here, I went ashore one day just below Spanish Fort, with
Dr. Drummond to take a look at the country + buy a barrel of
potatoes. Went into the commissary's for the latter purpose, + who
should be the presiding genius there by John Whittlesey, Camptain
+ A.C.M. from New Preston Conn. Of course we knew each
other + closed one interview with the promise to meet if possible
in Mobile. The city has since been captured, + now here we are
our offices within not two squares apart. We had a jubilation
together over the arrest of Geo. Hitchcock, not so over a "fallen
enemy", but because it seemed a sign of coming retribution
to a mean traitor to his country + disgrace to his county + state.
You need not read this out of the family for I ought not to quote
the private sentiments of another in such a matter. For myself I
simply despise Mr. Hitchcock + all of his color." It did me

[page 4]
good to say this yesterday to a gentleman across the waya, a true
southerner who gave his heart, and I suspect one foot to the
rebel cause for it is gone somewhere. He said to me "If I had
been born + lived at the north, I ought have felt as any northern
men do but ____, + his eyes spoke the rest. I told him that
for such as he, I had, if not sympathy, at least respect, but
for northern rebels perfect hatred. This morning I attended
episcopal church with Whittlesey, Commodore Palmer, General
Andrews + a good many army + navy officers + men were present.
The service was well conducted, and the sermon excellent. No
allusion was made to the state of our country. What could he say
on that subject to such an audience? people who a few days
ago only spoke to each other through the cannon's mouth, now
filling the same pews, listening to the same preacher. His text
was, "Simon, son of Jonas, lovest though me? The hymns were
our own, the music such as we often sing at home. We were one people
in that church. very soon the whole land will be united, + united
in heart more than ever we were before. I believe that.
To day Capt Whittlesey lent me a copy of the Litchfield
Enquirer. It was partly as good as a letter. Any news, any
scrap of paper even from the section is precious to me, + never
before, I think had such value in my eyes. I can write but
little to my friends, scarcely any at all, so that their letters to
me are far between. Yet I prize them none the less. If
Martha ever writes you "letters for two" I wish you would send
them to me to read, as otherwise I hear but seldom from her. She seems to have
"sent me to grass lately", but the pasture is lonely, tell her, and wish for my sister often.
Cornelius 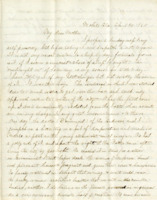