William Smith writes to his wife about the regiment's recent combat experience, serving in a noncombat role, and the prospect of a draft. 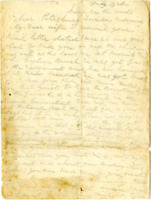