Cornelius Gold writes to his mother about Sundays at camp, religious practices, and his exploration of Hilton Head.

Hilton Head SC March 20, 1864
My dear Mother,
I propose to begin this week well, by starting
a letter for you on the first day, that the mail may not catch
me napping as it did last week. The days is almost gone, it lacks
but 20 minutes of the signal for putting out lights, but perhaps
before then I may let you part way into this day's doings, and
make ready to let myself into blankets.  The first sound
that broke the stillness of our sabbath morning air, was heavy firing
of artillery with two or three volleys of musketry in the direction
of Seabrook, a picket station + steamboat landing four or five miles
distant and at the entrance of the division stream between our own
and the rebel lines. The firing continued for an hour or more, and
put us all to our wits ends to know what it meant, though too
confident of our position to be rendered at all uneasy by it. The
upshot of the matter was this. Five ^small boatloads of rebels approached
Seabrook with an evident intention to feel their way "ashore, but
found more yankees than they expected in the decimated state
of the Union Army since the Florida disaster. Our pickets formed
in line and gave them a good raking with musket balls, when
they turned right about + made tracks for the other side of Jordan
groaning loud enough to satisfy our men with the effect of their
fire. A Gun boat then steamed up and shelled the rebels back
to a respectful distance. About 6 o'clock this afternoon while writing
in the adjutant's tent + listening to the talk of the officers, a message
came from the commander of the District for Col. Duryea to repair at once

[page 2]
to his quarters. He left, expecting a night in the saddle and
ordering Col. Meeker in case of a telegram from him, to man
every gun on the fortifications + be ready for action. So you see
we have a little stir here that seems like a breath if not a "blast of
War." But we anticipate nothing serious. The withdrawal of so
many troops from Port Royal makes the enemy in our vicinity more
daring than usual and from occasional skirmishes with our
pickets + picket boats we judge they are feeling our strength a
little. Our commanders are cautious as they have reason to be.
I have not been to church today. Our chapel (which is only ours by
sufferance_ passed into Roman Catholic hands for today,+ our
little altar became a table for the Priest of Rome + his "Mass".
Mr. Mitchell went there, but could not enter on account of the throng
about the door caused however not by the crowd within, but, according
to Mr. O'Brien by the too hasty devotion of those first entering, who
dropped forthwith upon their knees and blocked the passage so
that his Holiness had full half the house to himself, many poor
sinners remaining without. There being no church, I took an
Independent and walked around my "square", which isn't square at
all but oblong + quite shapeless one mile across the plain to where
the road issuing between Battery + "nat'ral born" sand knolls,
strikes the beach, and another mile back by the water side. There
is a remnant of a Wood + a whole swamp left within the entrenchments
where by bog jumping + tearing trousers in the thicket one may
gather wild blossoms from flowering shrubs. I ventured far
enough into the slough to pick a handful of sweet scented blows,
white + yellow, brought them home with me, filled a small milk
can with water, + for the first time since my sojourn in the south make

[page 3]
boast of a Bouquet on my table. t is not quite as id some
fairer hand than mine had placed it there, but it is right lit pleasant
and makes me fonder of my tented home than ever. The little space
is full of fragrance like the perfume from a Hyacinth.      After dinner, I read a little, wrote a little, took a nap, and some time
during the day have taken in several chapters from the Book of Samuel
After supper I finished the necessary business writing for the day,
and took another two mile walk on the shore. Returning past the
General Hospital, I was reminded of a prayer meeting held there
this evening, and directed by the sound of a hymn, found my
way to where the saints were fathered. It was in the great dining
hall, a nucleus of the Hospital Chaplain, three or four ladies + as many
officers, and perhaps a hundred "rank + file" gathered in one end,
with nearly as many more strung along toward the outer door.
Among the last I took my seat, being a latecomer, + an early
goes, from necessity. The meeting was very interesting, and it was
particularly pleasant to hear the singing had by a full-voiced lady.
Generally I much prefer a good male leader but the rarity of the
other in these parts makes it valuable. I would not have you think
the singing was the chief attraction. It strengthens me to breathe an
atmosphere like that, and if anywhere in the world we need to "meet
together for prayer" it is just here, where constant contact with Godless
men inclines us to forget God.
^Wednes Tuesday March 28. The fat mail bad just staggered into camp on the
shoulders of a stout soldier, and pending the distribution I will finish
this, that the carrier may not return empty handed. The "Line
storm" struck us like a thunderbolt on Monday night, "weeping + wailing

[page 4]
for 36 hours thereafter. A dismal cold storm it was, but the clearing
away this morning before a clear bracing norther is delightful.
When I have said my little say to you, I intend a trip for the
"benefit of my health," and as big a draught of Oxygen as the
Dutchmen take of Pager-bier. For two days past, I have alternately
hugged a hot stove + slept in damp blankets till the result is
anything but enviable. It makes a fellow feel slightually stiff
+ top heavy. No real damage done however. The rebels keep up
a little irritation along the picket lines, drawing a stray shot from
night to night, causing double guard on our side + double vigilance,
that is all. A son of the rebel General Finnegan has been recognized
on this island, + fired at once by a sentinel. He is lurking about in the
capacity of a spy and it is thought the hostile demonstrations maybe
with intention of facilitating Finnigan's escape. It is a difficult
matter to ferret  him out, and about as difficult for him to get
out of the scrape himself. If taken we may have the privilege
of "hanging a spy". Last evening quite an excitement started into
life with a ring from the fire-bell. Post Hd Headquarters were
on fire. Fortunately the flame was subdued before reaching the window
or the damage would have been serious in such a wild windy
night. So you see the light intermittent fever of Hilton Head
keeps us from entire stagnation. Here come the precious documents.
I must stop short + "read, mark + inwardly digest," the few that
pertain to me. The feast is over + it was a feast, though I shall still
have room for the dessert in the barrel. Perhaps it may arrive in time to
acknowledge by this mail as I will leave my letter open. The handkerchief
is welcome. Please thank you "Willis" for the "Palladiums" + "Pictorials." His
sister must be a marvellous good ace. Take sure, if he thinks it would give her pleasure
to arrange + China leaves. I have no sort of objection, though I supposed the pretty

[page 1 -- text vertical]
ones all disposed of. But you had better have the names of places + dates with each, asthey give the leaves
their principal values. This lastly the way is
in reply to Harry.
You need not be
"surprised" at all
at my being "home-
sick some times
since it does not in the slightest
interfere with
my contentedness
here. It is a very mild form of the
disease, comes seldom
and then only as a
gentle reminder
that I have a home
to love + be "sick"
for if I choose.
There hath no tempta
tion taken me except
such as is common to
man." I am no whit
less happy than I have
been from the first.
Your aff.
Cornelius 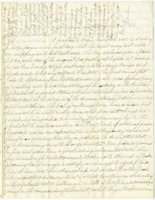