Cornelius Gold writes to his mother about preparations for the assault on Mobile, life on board the USS Stockdale, and the fear of illness in the navy and at home.

U.S.S. Stockdale
Mobile Bay. March 5. 1865
My dear Mother
I am just in my room, from an
hours lounging outside, my head full of stories fuming + earnest
that have poured in at both ears from the voluble officers of the
“Stockdale”, the topics mostly religious, + the scenes laid in New
Orleans + Port Royal, Connecticut + Kansas, touching the skirts
of rebeldom in its whole circumference. Together we are a walking
Epitome of the universal Yankee nation, and have circulated through
many of the arteries of this little Globe. When I left the company,
the conversation was verging into a theological discussion for which
tonight I have no desire. I hear them now plunging into the waters
of the “Flood: and hailing Noah’s Ark with a nautical “What ship is
that”? and they cannot quite decide whether to call it “Phantom”,
“Flying Dutchman”, or the veritable “Ark of safety into which went
Noak + his wife his sons + his sons’ wives + the cattle. Perhaps our
talk may take a more practical shape by and by, when preparations
are complete, and the fleet moves toward Mobile, the time for
action at hand. To see the gathering forces of army + navy + feel
the pulse of its daily gaining strength, makes me certain of success.
Yet I have been thinking today how easily our very ground for hope
(superior numbers) might become the means of disaster, should the favor
of God not be with us, how easily he might let send a pestilence upon the

[Page 2]
herded thousands, and destroy our overweening confidence by disease.
A few hundred yards distant from us, lies an infected steamer,
cut off from all communication with the fleet, flying a yellow flag
which says to all approaching boats, “keep off. small Pox”! It is no
special cause for alarm + gives none, but that yellow flag in her
midst, is to me a constant reminder of a Higher Power than our own,
reliance upon which can alone make victory sure.
There is a probability that Admiral Thatcher will select the “Stockdale”
as his Flagship in the attack on Mobile, indeed I believe has already
chosen it, though he may change. Whether in that case I shall be allowed
to remain on her is very doubtful, as with any clerk, office, + the stores
for my vessels, I monopolize more room than may well be afforded
on the Flagship of an Admiral. This boat is certainly not selected
for its war-like properties, but its commodious quarters + light
draught of water, being built to navigate over shallows + scrape
the sandy bottoms. This reminds me of my experience the past
week on my return from New Orleans, where I passed several days on
business + seeing the city. We were thirty six hours reaching the
Bay, when ordinarily it takes 15. A heavy fog blinded the pilot
so that he completely lost his way. We ran aground six times
on the passage, at last landing high up on a hard bottom, where
we stuck all night. It is well there are no rocks on this coast,
as it is, we only laugh when the keel goes grinding through an
oyster bed and the bivalves bite our bottom. A mosquito were not
less harmful. This is a great country for oysters! Aunt Julia ect
should happen here after a hard headache, she might feast on the fat of the sea.

[Page 3]
March 8. The Admiral comes on board tomorrow with his
staff. Such an addition to the family knocks us all askew, + we
must expect no little discomfort as the price of the honor, being
crowded into half the space we held before. Besides this we must be
constantly on our good behavior, skinny boots, uniform + so on,
and sleep in our dress coats instead of nightgowns. We all groan
at the prospect, from Captain to Cabin Boy, and as for me I begrudge
every inch of room of which I shall be deprived, as a business necessity.
My duties are rather arduous though not too much for me, with
my clerk, and occupy brain + fingers uninterruptedly from
morning till evening. The necessity of visiting my vessels is
a good thing for me. I assure you I am much better pleased with
this busy port, than with the life of “inglorious ease” to which I
looked forward on the “Vincennes”. Mobile is not yet evacuated,
but we look for that event shortly + at the point of the bayonet.
so much vaster plans are a foot farther north, so much
nearer + louder sound the guns from the armies of Grant +
Sherman, that I know to you the taking of Mobile seems a slight
affair + of scarcely more account than the capture of a rebel outpost
at the James. But even here you might see no insignificant
movement in progress . I suppose that in addition to the
formidable fleet, there are fifty or sixty thousand men in this
vicintiy, + gathered for a purpose. What that purpose is, we
must time will unfold. The mail came again to
day. My second intelligence from home, + this time as before a package
of back letters, three of them from you, + two of Henry’s, one also

[Page 4]
from Martha. I am grad she is so good about writing to you
She tells me of Bertie’s illness + that Uncle Winthrop seems
improved under the “Movement Cure”. Poor little Bertie has
had a tiresome time of it, and I know well enough that the
nurses too are worn + weak with their watching. They must be.
If only they might all be well and strong! Why are some
people forever ill, or burdened with the sickness of others most
dear to them! God setteth the feeble in families I think.
Henry is testing the cold March of Massachusetts. I am no
little anxious for its effects upon him, though a trouble that
settles so firmly in his digestive organs would see proof to weather
or anything beside meat and drnk. I hope that Dr. Dio. will
give him more personal attention than he appears to devote to
most under his care. It seems to me his reatment is better
adapted to preserve the healthy than heal the sick.
It is after my bed time, and I must not dissipate even in
this filial way. You will certainly agree that it is better to keep
fresh for work, that spend undue time or strength in writing letters,
when to do both is out of the question. But I will try not to
neglect you whatever may be my course toward others.
I like to write any friends when I can do so. It makes life
richer + sweeter to share even the bitterness of it with those
we love. Thank Mary Smith for her letter + Cousin Abbie Guinn
for the wee note of remembrance. These things are not lost upon me.
My love to aunt Mary Brude + remember me to Mrs. Mitchell. It
is kind of them to inquire after me.
Your aff. Cornelius 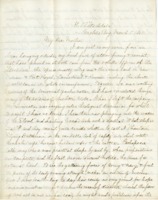