Cornelius Gold writes to his brother about preparations for an assault on Mobile, sending and receiving letters, and the inconveniences he has dealt with.

U.SS. “Kittatinny”
Off Mobile April 9, 1865
My dear Brother
Since you are home again
I see no impropriety in varying the address of my home
letters occasionally from mother to brother. The change
need not entail upon you the necessity of replying. As
my own letters in these days to one of you, must answer for
both, so, though the sight of your hand writing is pleasant, I
am contnt to have mother tell the whole tale of the family.
You must expand your spare strength in rubbing up that
valuable but unruly body of yours. I hope you will lose no
time in securing a good “groom: to assist at that business,
+ let no motives of false economy keep you from any help
to health, that the “wealth of the Indies” would bring over
Churchhill. Just now you are happy in the healing presence
of our good sister Martha. I am grlad she can be a little
while with you. I have a little smack of her sweetness to
night in a twin note to mother;s that came with it. A
slight tremor of moesickness came over me as I broke the
seal, just enough to lessen my love for the writers. Yet no such
assurance was needed. The longer I live, and the farther
from home, the dearer it grows I believe I do not wish to be weaned

[Page 2}
from it. When that is gone, there is little left in this world
but hope for the other, the “glorified body” of this.
You see how I am shifted about here from one ship to another
no settled place of abode, not half so independent as a
“squatter soveraign”, for no sooner do I get fairly squatted,
than some “big-wig” claims the spot for his own, + hoists
the flag of an admiral or erects a hospital. I was on
board the “Tallahatchie” when two monitors + a tinclad were
sunk by torpedoes. It was her fate to be chosen as a transient
home for the sufferers. A proper selection, she is so large
and comfortable. And surely we aught not to begrudge our
little convenience to the wounded + dying, dead now some of
them no doubt. The tin-clad “Rodolph”, was built like the
“Stockdale” + “Tallahatchie”, and it was my choice to be ordered
to her on leaving the “Stockdale”. Fortunately she was about the
day I changed, and being hindered from going to her, I was
saved perhaps from sinking with her. It seemed a double
providence to me, for the “Tallahatchie” would have gone instead
of the Rodolph that day, had not her fires just been extinguished
for some slight repairs, and, as matters stood, probably have
struck the same torpedo. We all have a horror of these
ugly concerns, and always return with relief from a cruise over
the haunted waters. But there are no more such cruises for me.
The “Kittatinny” lies quietly at anchor day in and day out, while
the hungry fleet come to her for bread. She is a neat, pretty
affair with five wide mouthed guns, four broadside, and

[Page 3]
a thirty pounder Parrott Rifle on the quarter deck that “turns
every way”. Then there is a spunky little brass howitzer
mounted forward. Altogether we are very war-like, and very
peaceable too. Our pet kitten + squirrell attest the last
quality, for don’t they run about deck all they please +
love each other like Barnums snakes + monkeys! The
Stockdale + Tallahatchie were even more domestic, one having
goats + pigs roaming at will, and the other, pigs and a puppy
that lived on the most amicable terms + were accustomed to
a regular frolic with us on the hurricane deck before dinner.
I fear the poor piggies have gone the way of all pork before
this. Today our flads float for a double victory,
are by the army here over rebel works that were bulwarks to
Mobile, + that being taken, ensure the speedy face of that place.
All night we could see the flash + hear the thunders of the
fight. At day-light all was still + the Union flag floating
over the fortress of our enemies. Though the navy could render
little assitance, I do not feel myself deprived of a share
in the glory by that fact. I claim yet to be a citizen of the
army. An infinitely greater cause of rejoicing, is the
fall of Richmond! The end of the war seems near, and
an end of which Americans may be prout. No news ever
thrilled the land as I think this must today, nor ever one
with more delight , unless it be the final proclamation of
perfect peace. I may have mentioned in my first
letters home from the Gulf, the name of Paymaster Brinckerhoff

who came passenger in the “Fort Morgan” with one. We had a
room together. By the last paper from New Orleans, I learn
that he has accidentally shot himself with a revolver, the
wound “dangerous but not mortal”. I hope he may recover, +
was sorry enough to read of his misfortune. This is the
second time within two months that his pocket pistol has
nearly been the death of him. I may be tempted to use
one, if many more boats are given me to care for. My hands
are already as free as they can hold with the seven
but only yesterday another steamer was added to the list,
and I learn that the accounts of a ninth are on the way to
me. The tug paymaster of this fleet has no sinecure
position I assure you. In place of the one steward that
I supposed would be my whole allowance of aids, I have had
a clerk + five stewards, with need of more, a steward on
each vessel to take charge of stores. I shall be grateful
when Mobile us taken, and this fleet scattered, if so I
may get rid of part of the mosquito fleet, but I
anticipate no such relief at present. Do not imagine
from this that I am sick of my bargain. I should not
be a sailor if I could not growl, and one of these days
I may look back to mobile Bay as a sort of Paymaster’s
Elysium. I shall at least have the satisfaction of having
earned my porridge – no small item to my mind.
Mother need not despair of her letters reaching me or count the
writing of them lost. They do come, only with great irregularity. Lately
the mails are improving. Your aff. Cornelius 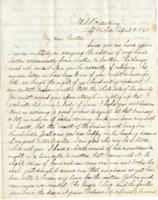