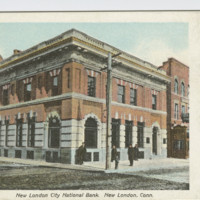 In the early part of the nineteenth century, New London was the only city in Connecticut with two banks. The New London City National Bank was the second bank; this structure on Bank Street was built in 1905 after an earlier building on the same site had proved insufficient. It now is the site of a Liberty Bank branch. (Sources: A Modern History of New London County, ed. Benjamin Tinkham Marshall [New York: Lewis Historical Publishing Company, 1922], 428-30; http:www.historicbuildingsct.com.)